An Iowa woman was shocked to find out that small red dots that appeared on her arm and legs were signs of a highly dangerous form of blood cancer.

Helaina Hillyard, 20, of Mediapolis, Iowa, noticed small, freckle like, red dots appear around her arms and legs in November 2021, slowly growing and spreading within a matter of hours.

She at first believed that it was a small sports injury, and went to the hospital to get it checked out.

While there, she received the shock of her life, discovering that she had acute lymphoblastic leukemia (ALL), a blood cancer that kills around a third of people who suffer from it. 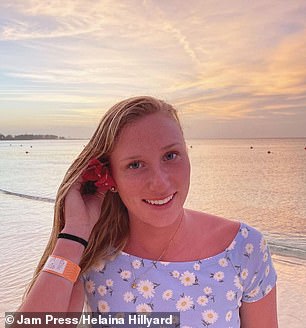 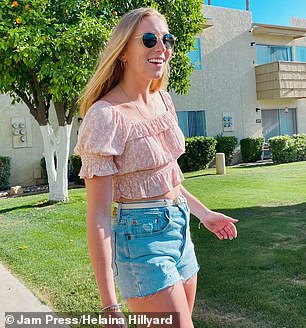 Helaina Hillyard (pictured), 20, suddenly had red dots appear on her arms and legs last November. While she did not think much of it at first, but went to urgent care, and later an emergency room, after being told to go by her sister

‘I was in disbelief,’ Hillyard wrote in a first-person report for Newsweek, where she described her ordeal in great detail.

‘In the ER, they had told me that if I had waited much longer to go to the doctor I could have had a brain bleed and died.’

Hillyard, who was described as a ‘once-in-a-lifetime athlete’ by The Hawk Eye for her incredible play in both volleyball and basketball as a high schooler, said that she had felt fatigued for weeks leading up to the dots appearing, but had chalked it up to a poor sleep schedule.

He sister and brother-in-law were visiting to watch her play when she first noticed the bumps. While she did not think much of them, her sister was extremely concerned.

Early the next morning, her sister took her to an urgent care clinic, where she was quickly referred to an emergency room for blood work.

The tests she had low platelet counts, then doctors became extremely concerned.

‘When the doctor came back she was asking me about my different symptoms, including whether my gums had been bleeding,’ Hillyard recalled.

‘I explained they had been bleeding when I had been flossing and in that moment, her face just completely dropped. I think she knew that was a sign it was a type of cancer.’

She was then referred to a nearby oncology hospital, and she ended the night with a diagnosis of ALL.

The American Cancer Society reports that around 6,600 cases of ALL are diagnosed every year, with it being tied to over 1,500 deaths.

Young children under five suffer the highest risk from the cancer, with risk of being diagnosed flattening by a person’s mid-20s. Risk for the cancer rises once again starting at age 50.

‘I was in disbelief,’ Hillyard continued.

‘I’m just blessed my sister was there with me, because I can’t imagine getting that diagnosis and not having a support system. In the ER, they had told me that if I had waited much longer to go to the doctor I could have had a brain bleed and died.’ 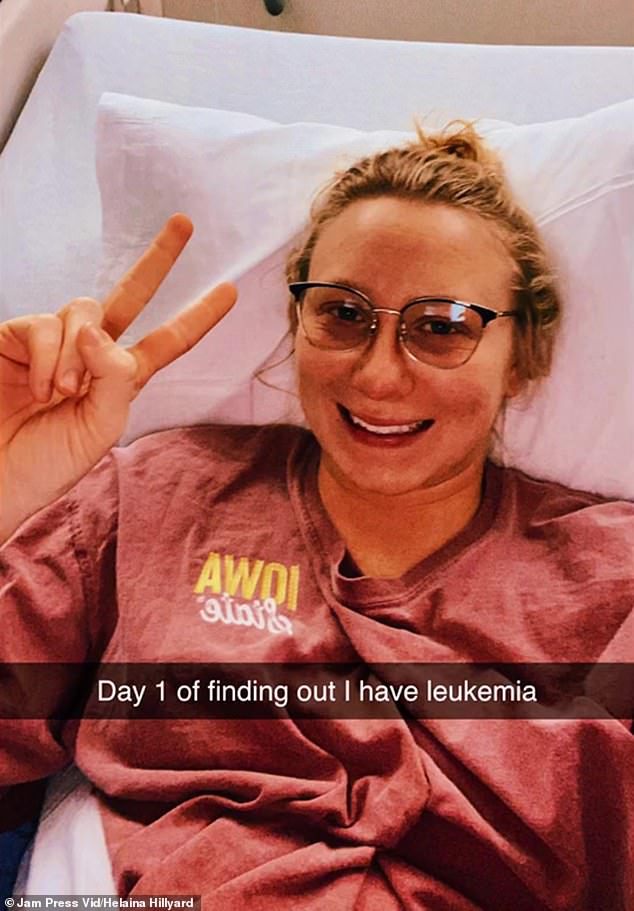 She later returned to Iowa for treatment, where she is set to receive two-and-a-half years worth of treatment, including five stages of chemotherapy that will take a combined 40 weeks.

Hillyard says she is staying positive despite the many side-effects she is suffering from – like hair loss, mouth sores, dry skin, headaches and fatigue.

She hopes that her condition has improved enough to return to university this fall.

‘I try my best to be positive most of the time, but I really am so blessed that I have such a great family,’ she said.

‘I live at my parents’ house and they are amazing. I don’t know how I would get through this without them and my sisters and friends. I think it helps with my mental health to talk about it, and not just push through.

‘Any time I don’t feel good, someone checks up on me. I definitely couldn’t do it without a support system. I feel like God has been with me every step of the way.’