The International Space Station (ISS) has been in orbit around Earth since all the way back in 1998, when the first component was carried into orbit, and has been in continuous operation since November 2000. Close to 300 people from close to 20 countries have made the trip up there over the years, but that will no longer be the case soon. As with all things in life, the station’s time will soon run out.

At the time of writing, there is no date set for the retirement of the ISS. The station came close to being scrapped a few years ago, but the arrival of the SpaceX Crew Dragon saved it from its demise. Now, there’s increased chatter about the hardware’s physical state, with Russia recently warning about irreparable failures.

What that means is that sometime soon, the life of the ISS could end, especially given how it is approved for operation only until 2024. Even so, space animation specialist Hazegrayart estimates it could still hang around in orbit until 2032, when it will eventually fall back down to Earth. The group even compiled a video of how this entire de-orbiting procedure could go, and you can see all that in the short clip below this text.

As with all things that come crashing down from space, the station will slowly sink into our planet’s atmosphere, catching fire due to the effects of friction. Its outer edges, including the solar panels, will be the first to go, killed by fire or ripped from the station by the immense forces.

Moving closer to the surface, it will turn into a line of fire, with a trail of debris behind it, until it eventually breaks up into smaller, bright pieces.

As with most things brought down from orbit, the ISS will likely fall into the ocean, possibly in the so-called Point Nemo region of the Pacific where human spacecraft usually get buried. 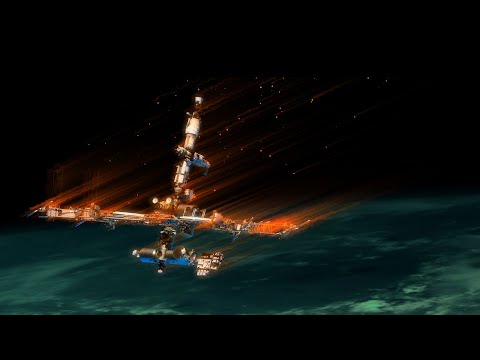