A SpaceX Falcon 9 rocket upper stage has been captured in amazing footage breaking up in the atmosphere over Mexico, five years after it first launched.

Some of the footage, shot over Cabo, Mexico, shows the break up of the rocket, with small pieces flying off in various directions to break up in the atmosphere.

This upper stage was part of the Falcon 9 that sent the Echostar 23 mission into space in March 2017 – one of 18 SpaceX launches that year.

The rocket met its demise on Saturday, and it appears the entire upper stage broke up in the atmosphere, with none coming down to the Earth.

It was reported as looking something like a meteorite by bystanders, as it streaked across the night sky, forming a long train of disintegrating debris. 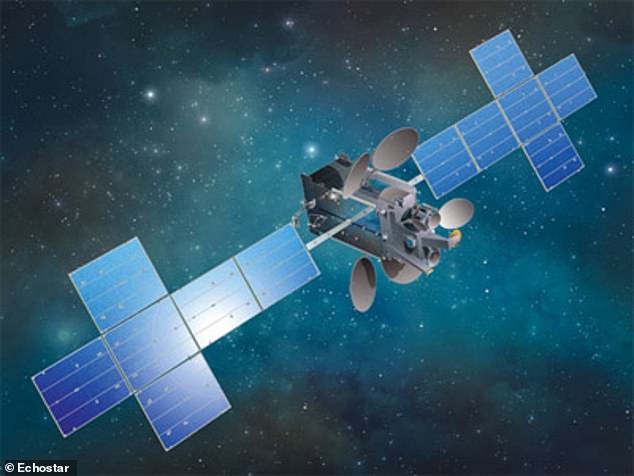 This upper stage was part of the Falcon 9 that sent the Echostar 23 (artist impression, pictured) mission into space in March 2017 – one of 18 SpaceX launches that year

This isn’t an unusual sight for skywatchers, as it is normal for rocket stages to burn up in the Earth’s atmosphere, as they return days, weeks or even years after launch.

The Aerospace Corporation, which tracks upcoming reentries of satellites and other space objects, confirmed it was the Falcon 9 upper stage from five years earlier.

As it streaked across the Cabo sky for a minute, the spacecraft was actually breaking up at 17,50 miles per hour.

Witnesses said they could see various parts break off from the bright main mass and separate, burning up at different rates. 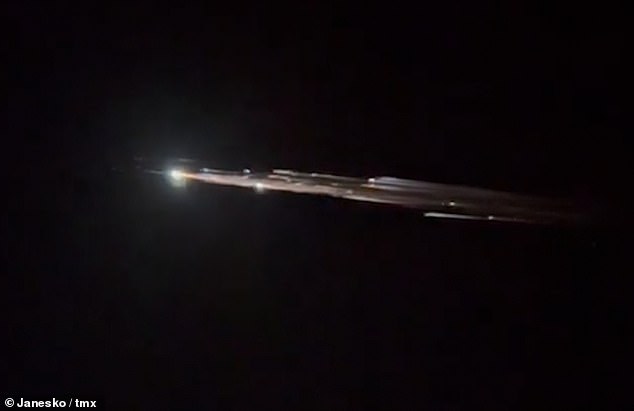 It was reported as looking something like a meteorite by bystanders, as it streaked across the night sky, forming a long train of disintegrating debris

She’s breaking up, she’s breaking up!
Around 1am, Gen saw this incredible spectacle streak across the Cabo sky for over a minute. It is a spacecraft breaking at 17,500 MPH. Various parts break off the bright main mass, and separate from differential drag in the upper atmosphere. pic.twitter.com/B53sHz1axM

The satellite it carried to space in 2017 was an Echostar 23, which was launched to geostationary orbit 22,300 miles from the Earth’s surface.

It was targeted to sit above the equator and provide broadcast, internet and communication services to Brazil.

It is still operational and will last for at least another decade, before it is expected to be replaced by another Echostar mission.

‘The satellite has a design life of fifteen years and will begin its service life in an orbital slot at a longitude of 45 degrees West,’ NASA explained. 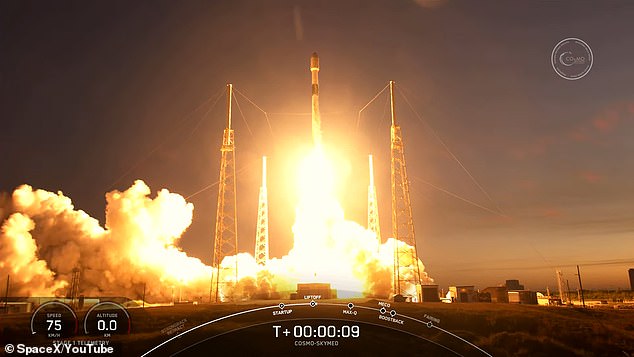 A SpaceX Falcon 9 rocket upper stage has been captured in amazing footage breaking up in the atmosphere over Mexico, five years after it first launched. This was not form that launch

‘However, it is able to operate in any of EchoStar’s eight geosynchronous slots allotted to Ku-band broadcasting satellites.’

This was one of 18 SpaceX launches in 2017, with the booster coming down in the Atlantic Ocean. The second stage, which burnt up on Saturday, originally entered orbit and gradually fell to Earth over the past five years.

Since 2017 SpaceX has been gradually increasing the number of launches, and this year is on target to send a rocket into space every week – a total of 52 for the year. 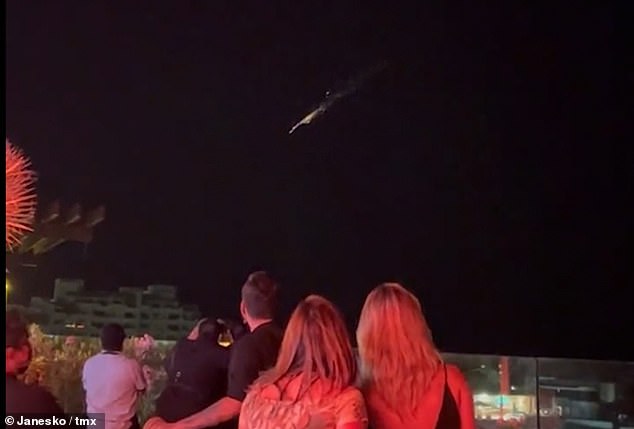 It was reported as looking something like a meteorite by bystanders, as it streaked across the night sky, forming a long train of disintegrating debris

Of the 52 missions scheduled for 2022, there will be multiple crewed spaceflights for NASA, and the Axiom Space AX-1 mission, that will take the first fully civilian crew to the International Space Station in March.

Another SpaceX Falcon 9 upper stage is going in a completely different direction, headed to the moon, rather than burning up in Earth’s atmosphere.

That rocket, launched in 2015, has been floating in a chaotic orbit since it was used to send a weather satellite on a million mile journey.

It is expected to hit the moon on March 4, creating a new, small lunar crater.

See the SpaceX Falcon 9 rocket on course to hit the MOON: Deep space telescope gives us our final glimpse of the craft before it collides with our lunar satellite on March 4

An out-of-control SpaceX rocket has been caught on camera tumbling towards the moon ahead of its impact with the lunar surface next month.

The spent Falcon 9 booster has been floating around in a somewhat chaotic orbit ever since Elon Musk‘s company launched a space weather satellite on a million-mile trek seven years ago.

It is expected to smash into the moon and explode on March 4 — in what will be the first known uncontrolled rocket collision with Earth’s only natural satellite — but astronomers say the effects will be minor.

The rocket was launched in 2015 but after completing its mission to blast the Deep Space Climate Observatory (DSCOVR) to a sun-Earth LaGrange point, it did not have enough fuel to return to Earth and instead remained in space.

For the past seven years the booster has been pulled by different gravitational forces of the Earth, moon and sun, making its path somewhat ‘chaotic’, before it was revealed last month that it is set to hit the moon at the beginning of March.