Lewis Hamilton reacts to reaching a century of wins after dramatic conclusion to Russian GP; Hamilton hails Mercedes’ strategy decisions and Lando Norris, who so nearly knocked Hamilton off his perch as Britain’s youngest F1 winner

Lewis Hamilton hailed another “magical moment” in his Formula 1 career after claiming his 100th win in Sunday’s Russian GP, which he admitted would not have been possible without Mercedes’ strategy decisions and the rain hampering the “incredible” Lando Norris.

Hamilton already held the record for race victories having passed Michael Schumacher’s tally of 91 last year but reached a “dream” century in dramatic circumstances in Sochi, with Norris having looked set to claim his very first win before late heavy rain wreaked havoc.

Race leader Norris and McLaren’s decision to stay out on slick tyres spectacularly backfired as the young Brit spun off, allowing Hamilton, who was told to pit for intermediates by Mercedes, to capitalise.

It was just his second win in 11 races, but one that saw him move marginally back ahead of Max Verstappen in the title race. 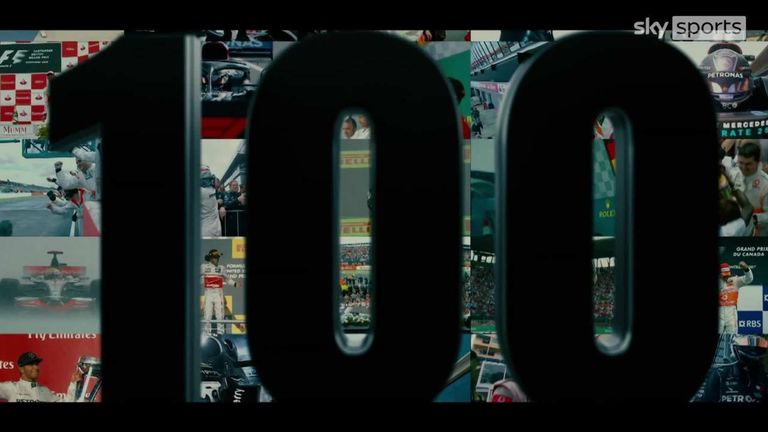 “It has taken a long time to get to 100 and I wasn’t even sure if it would come,” said Hamilton, the most successful driver in F1 history with seven world championships, 101 poles and now 100 wins.

“It is a magical moment. I could only have dreamed of still being here, to have this opportunity to win these races, and to drive with such phenomenal talents this late on in my career.

Today we won our 100th race! Words can’t describe how it feels to make history with this team of hardworking, driven and passionate human beings. We must keep fighting, keep rising. We’ve got a championship to win #LH100 pic.twitter.com/e2oQHVAVDi

“I am so proud of everything we have done with Mercedes, on and off the track, and this is a special moment for everyone that has been part of it.

“My dad called me last night and he has always been that one to reassure me and to continue to support me. I feel incredibly grateful for the amazing support that I have had.”

Team boss Toto Wolff added to Sky F1: “I think we are witnesses of a career that is just amazing. The 100th race victory is just mind-blowing.

“I think if you were to be in awe that would be the wrong working relationship and friendship. But we realise that we are being part of a journey that no other sportsman in Formula 1 has done so far and that is beyond the races that we have won or the championships – from the human aspect it is something special.”

Hamilton’s victory came after making uncharacteristic mistakes in qualifying – crashing twice – and after losing three positions to seventh on the opening lap.

“Going to bed last night I was not the happiest with the job I did yesterday,” he added. “I watched the replay and they were subtle mistakes but not ideal.

“I was so determined when I woke up this morning and I was determined to just do the best job I could. I lost a lot of ground at the start trying to stay out of trouble.”

Speaking in the pen after the race, Britain’s established star Hamilton, 36, and rising star Norris, 21, reflected on the chaotic end to the race together, with Hamilton, who had hunted down Norris in the dry, admitting he didn’t first listen to his “great” Mercedes team when told to pit for dry tyres.

Hamilton: “Lando… you didn’t want to come in?”

Hamilton: “Me neither! I was like he’s right there. I guess you were in the mirrors doing the same thing.

Norris: “I think until then it was dry enough for slicks.”

Norris: “Our decision, what i was told, is that the rain was going to stay like that. Apparently what you were told was different…

Hamilton: “Yeah… my team were great today. But I ignored the first call.. I was like he’s right there!”

Norris: “I ignored them the whole time!”

Hamilton’s praise for Mercedes and Norris

Hamilton did indeed ignore the first call to pit on Lap 48 of 53, before coming in a lap later. It turned out to be a masterstroke, as drivers who stayed on the slicks couldn’t keep their cars on the track.

“The team made a great call right at the end,” admitted Hamilton. “I didn’t want to let Lando go and I didn’t know what the weather was doing. I’m incredibly grateful to all these men and women here and back at the factory.”

He also reserved more praise for Norris, who would have knocked Hamilton off his perch as the youngest Briton to win a race if he had hung on.

“Lando did such an amazing job, he had incredible pace and is doing such a great job for McLaren,” he added. “It was bittersweet to see my old team ahead and they’re doing fantastically.

“It would’ve been tough to get past Lando [in the dry] unless we came up to some traffic or he made a mistake, which he hasn’t been doing, so then the rain came and it was very opportunistic.”