A pice of space debris expected to crash into the moon on March 4 is not part of a SpaceX rocket, as initially thought, but a booster from a Chinese spacecraft sent to the moon in 2014.

The item now floating near the moon was first identified as part of a SpaceX rocket by Bill Gray, the developer of the astronomical software Project Pluto.

He thought it was the booster from a rocket launch in February 2015, which sent a weather and Earth observation satellite named DSCOVR into orbit for the US National Oceanic and Atmospheric Administration.

But on Saturday, Gray got an email from Jon Giorgini of NASA‘s Jet Propulsion Laboratory explaining that the trajectory of that rocket didn’t go ‘particularly close to the moon,’ Gray wrote on his blog, which prompted him to look again and land on a different explanation.

The news that a SpaceX booster may be crashing into the moon made headlines, considering that a reusable rocket booster is a huge selling point for SpaceX founder Elon Musk’s Falcon 9 rockets. 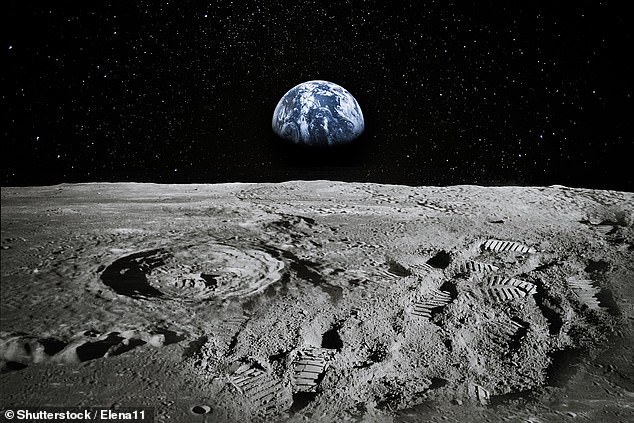 A piece of space debris expected to hit the moon on March 4 is not a SpaceX booster, as first thought, but a booster from a Chinese experimental mission from 2014 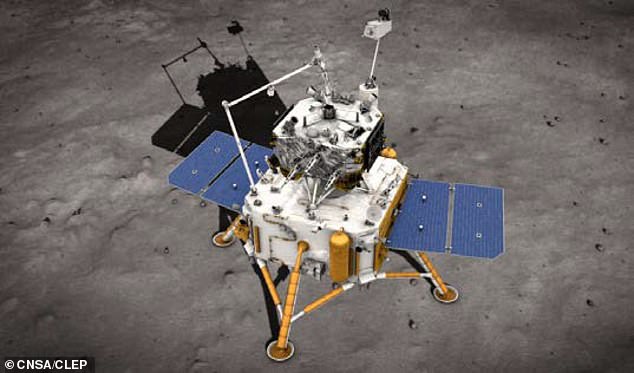 The booster helped launch the Chang’e 5-T1 spacecraft, a precursor to the Chang’e 5 mission which collected moon samples and brought them back down to China 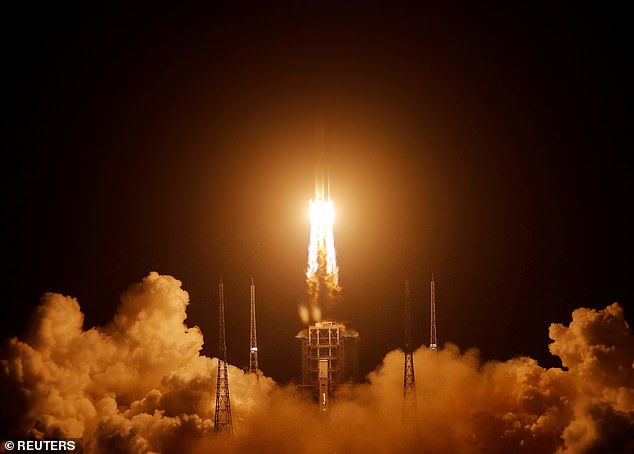 The official Chang’e-5 lunar probe (above) launched on November 2020 from Wenchang, Hainan province, China. The booster that will hit the moon was part of an experimental mission launched in 2014

News of the rocket’s impact with the moon was first reported by Ars Technica.

Mark Robinson, a professor of earth and space exploration at Arizona State University, told the New York Times last month that the item is believed to weigh about four tons and is traveling at 5,700 miles per hour.

It’s expected to carve a crater about 65 feet in diameter on the surface of the moon.

The piece of space junk doesn’t belong to SpaceX, but to China.

The Chang’e 5-T1 was an experimental spacecraft launched in October 2014 in preparation for the official Chang’e 5 mission, which launched in 2020 and made China the third country to bring back samples from the moon after the US and the Soviet Union.

The mission is part of the Chinese Lunar Exploration Program.

Gray wrote that the mission’s booster was first seen floating in space in March 2015 by the Catalina Sky Survey.

Because the booster had gone past the moon two days after the SpaceX DSCOVR launch, he said that he and other astronomers ‘came to accept the identification with the second stage as correct.’ 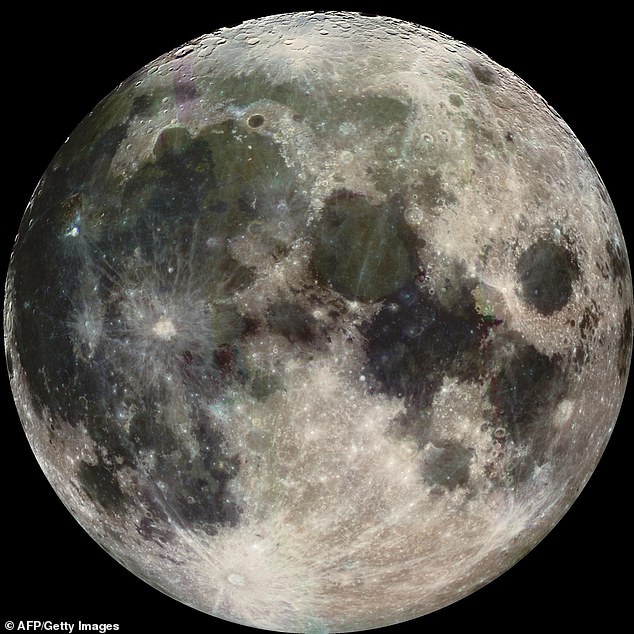 Bill Gray initially thought the booster belonged to a 2014 SpaceX launch, but was alerted that the explanation didn’t match the trajectory of the mission. The booster is expected to hit the moon at 5,700 mph and make a crater 65 ft in diameter 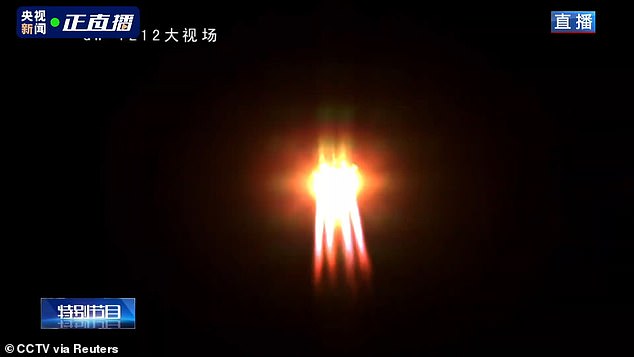 ‘The object had about the brightness we would expect, and had showed up at the expected time and moving in a reasonable orbit,’ Gray wrote.

He noted that space junk sometimes goes unidentified, and that putting a name to the items floating around in space often takes substantial ‘detective work.’

Giorgini of NASA emailed Gray on Saturday that the explanation was unlikely because of DSCOVR’s trajectory, which prompted Gray ‘to look for earlier space missions that might account for the object.’

He looked at the ‘preceding candidate launch,’ which was the Chinese Chang’e 5-T1 experimental mission.

‘It’s unclear when the Chang’e 5-T1 booster would have gone by the moon, but four days after launch would be a reasonable ballpark estimate. Running the orbit for WE0913A further backward, I got a lunar flyby on 2014 October 28…which is a quite close lunar flyby at about the right time,’ he explained. 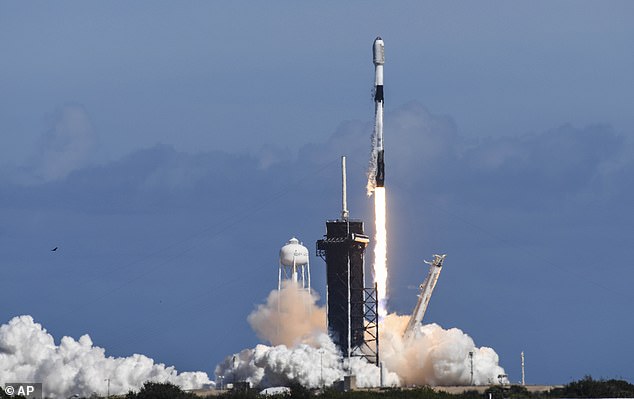 The booster on a crash course with the moon was first thought to belong to a SpaceX launch from 2014, which sent a NOAA earth observation satellite into earth. Above, a Falcon 9 rocket lifts off from Kennedy Space Center on February 3

Gray added that he should’ve noticed that the SpaceX explanation was wrong in hindsight.

‘Assuming no maneuvers, it would have been in a somewhat odd orbit around the earth before the lunar flyby,’ he said of the Falcon 9 booster.

‘At its highest point, it would be near the moon’s orbit; at its lowest (perigee), about a third of that distance. I’d have expected the perigee to be near the earth’s surface. The perigee seemed quite high.’

The perigee is the point of least distance from the Earth.

The initial, erroneous news that the booster belonged to SpaceX caused a stir, with some taking issue with the environmental impact of space junk in general.

Space.com notes that it’s more ‘environmentally friendly’ for a dead rocket to end up on the moon rather than through Earth’s atmosphere, where it turns into metal oxide particles as it re-enters.

‘The Moon also lacks an atmosphere to shield it from space debris, so it is accumulating naturally occurring impact craters all the time,’ according to the website.

In March 2013, a half-metric-ton asteroid rock going about 10 times faster than the current booster about to hit the moon hit the surface and caused a 19-meter crater.

In the past decade, NASA’s lunar impact monitoring project has spotted hundreds of other smaller impacts, including ones caused by chunks of rock weighing as little as half a kilogram, Space.com reports.

Two of about 40 SpaceX Starlink satellites that were brought down by a geomagnetic storm a week ago can be seen disintegrating over Puerto Rico in stunning new footage.

The obliterated satellites are seen as sparkling white streams in the night sky.

The footage was captured by a camera in Añasco, Puerto Rico, operated by the Sociedad de Astronomia del Caribe (SAC), a non-profit astronomy organisation.

Artist’s depiction of a Starlink satellite over Earth. Starlink is a constellation of satellites that aims to provide internet access to most of the Earth, particularly underserved rural areas 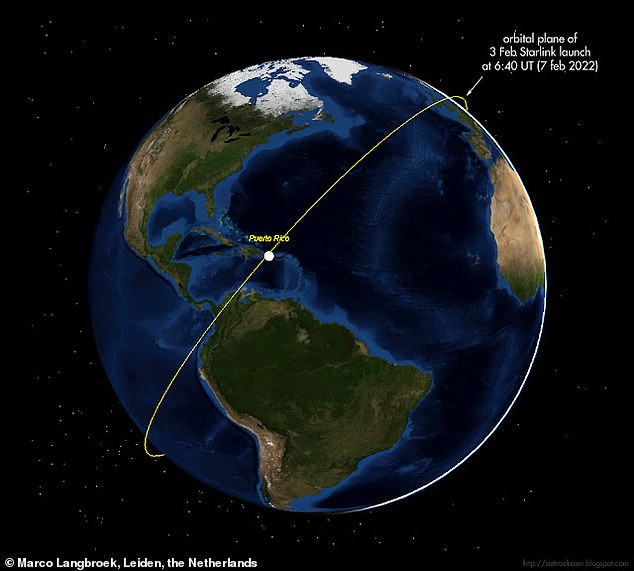 Marco Langbroek, a satellite expert from Leiden University in the Netherlands, is certain that these objects are Starlink satellites because the direction of the objects’ movement matches up with the orbital plane of the Starlink launch

As of February, over 2,000 Starlink satellites have been launched, as part of a constellation that provides satellite internet access to remote parts of Earth.

But SpaceX announced earlier this week that up to 40 of its latest batch of 49, launched on February 3 from the Kennedy Space Center in Florida, will ‘reenter or already have reentered the Earth’s atmosphere’ and therefore be destroyed.

Starlink satellites are not very big – they’re around 10.5 feet by 5.25 feet and weigh 573 pounds – so there is very little chance that anything of the objects will remain after reentering the atmosphere, meaning they won’t hit people on Earth.

Two objects can be seen in the new footage about a minute apart, both reentering Earth’s atmosphere and fragmenting.

According to Marco Langbroek, a satellite expert from Leiden University in the Netherlands, the second object is ‘especially spectacular’.

‘The two objects could belong to one object that has broken up earlier; or be two separate objects close together in the same orbital plane,’ he said in a blog post.

Langbroek is certain that these objects are Starlink satellites because the direction of the objects’ movement matches up with the orbital plane of the Starlink launch.