By Jamie Pyatt In Cape Town For The Daily Mail

Oscar Pistorius will meet the parents of model Reeva Steenkamp to try to convince them he should be granted parole for her killing.

The 35-year-old former Paralympian has been moved 750 miles to another prison for a meeting with the family of the girlfriend he shot dead on Valentine’s Day in 2013.

Pistorius is close to winning parole but must first give Barry Steenkamp, 78, and his 74-year-old wife June a chance to ask him about his crime.

The meeting was fixed after Pistorius wrote to the couple in October in what is thought to be his first contact with them since his trial.

The Steenkamps told their lawyer, Tania Koen, that the letter coming out of the blue was like ‘ripping a Band-Aid’ off a wound.

But they have decided it represented an opportunity to finally get the truth from Pistorius.

He has been serving his sentence of 13 years and five months at the ‘comfy’ Atteridgeville Correctional Centre in Pretoria.

Miss Steenkamp’s father, who has been treated for a heart condition, said the journey there would have been too long and Pistorius has been brought to the St Albans Correctional Centre a 15-minute drive from their home in Port Elizabeth.

If the couple feel he has shown remorse it will influence the decision by the parole board on his release. It is understood that the Steenkamps will be driven to the jail this week for the meeting.

A warder at St Albans said: ‘Pistorius arrived late on Friday and is being temporarily kept in a single cell far away from everyone else.’

An hour before dawn that day Pistorius was ‘ghosted’ out of Atteridgeville and driven the 750 miles to St Albans. 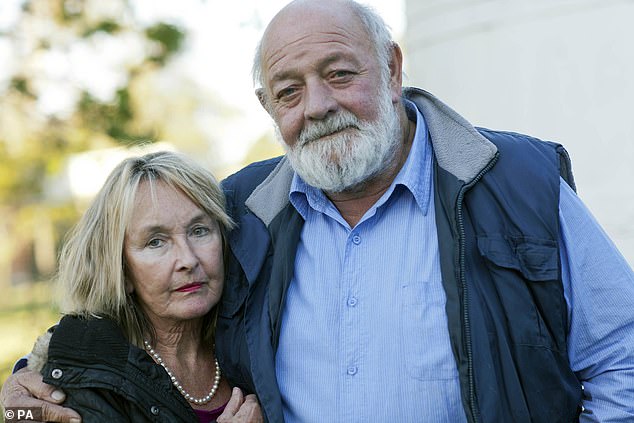 Pistorius is close to winning parole but must first give Barry Steenkamp, 78, and his 74-year-old wife June a chance to ask him about his crime

The 13-hour journey saw him being transported in a prison van with two police cars in support.

Described as a ‘hell hole’, St Albans houses 3,200 of the most dangerous killers and rapists in South Africa. Pistorius is being spared the general cells that are said to hold up to 44 prisoners.

He became eligible for parole in July after the Supreme Court of Appeal ruled that the 506 days he served before being sent down had not been counted in his sentence.

He was initially sentenced to five years’ prison in October 2014 for culpable homicide but the state challenged the verdict and a year later it was changed to murder and 13 years and five months.

At his repeated trials he claimed he was trying to protect Reeva, mistakenly thinking an intruder was in his bathroom.

Pistorius shot the model, 29, four times after crawling across his bedroom floor on his stumps with his pistol.

He was dubbed Blade Runner after being fitted with prosthetics to allow him to walk then sprint. Both his lower legs were amputated when he was 11 months old because of a birth defect.

Miss Steenkamp’s parents have said that, as Christians, they have forgiven him. Earlier this year they went on ITV’s Good Morning Britain, speaking from their home, saying they believed Pistorius had shown no remorse. They have also said they ‘are not emotionally prepared but will meet him’.

If Pistorius is freed he will remain on licence for life and can be recalled if he commits any other crime.

He has told friends he wants to teach sport to the disadvantaged.