There has been a significant rise recently in the number of children hospitalized with pediatric inflammatory multisystem syndrome (PIMS), a rare condition that develops in some children, after exposure to the coronavirus, Channel 12 news reported on Sunday.

Since the beginning of the month, 35 children have been hospitalized with the syndrome, including a boy aged 6, and a 6-month-old baby.

The report came the day after a 16-year-old boy died from complications caused by PIMS. Aden Jamal Fayumi, a resident of the central town of Jaljulia, was believed to be the first recorded fatality in Israel from PIMS since the syndrome was identified.

Itai Pessach, director of the Safra Children’s Hospital at the Sheba Medical Center, explained to Channel 12 that the syndrome is still rare and only shows up in around one case for every 10,000 children who are infected with COVID-19.

The relative spike, he assessed, was because of a wave of coronavirus infections, the fourth the country has seen, that began waning over the past couple of weeks.

Pessach said parents can identify the symptoms — which include persistent fever and serious inflammation — because suffering children are clearly unwell, and the illness shows up starting 2-4 weeks after recovery from COVID-19. 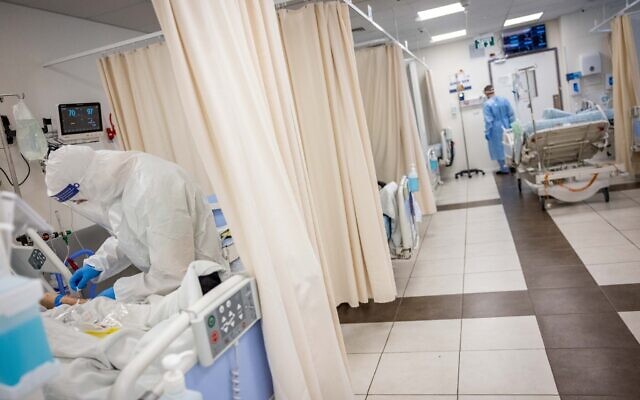 Hospital team members wear safety gear as they work in the coronavirus ward of Shaare Zedek hospital in Jerusalem on September 23, 2021. (Yonatan Sindel/Flash90)

PIMS, he said, comes from the over-activation of the body’s immune system to the coronavirus, causing the body to attack itself. There is a treatment that helps the immune system to calm down, and the sooner it is given the better, Pessach said.

“This can rapidly lead to a need for intensive care and to various organs in the body not functioning,” Adler said.

So far, there have been at least 120 cases in Israel of PIMS, although the figure could be higher, Channel 12 reported. According to Prof. Zachi Grossman, president of the Israel Pediatric Association, 100 children have been hospitalized in serious condition with the syndrome.

Also on Sunday, a senior health official addressed claims by some women who have received COVID-19 vaccines that the shots caused a change in their monthly menstrual cycle.

Dr. Sharon Alroy-Preis, head of the Health Ministry’s public health department, said that there could be a connection between COVID vaccination and changes in menstrual cycles, but that the subject needs further clarification.

Speaking at a ministry gathering of university health researchers, Alroy-Preis stressed that it is a temporary phenomenon and that by the following month women naturally return to their previous schedule. She also noted that, according to the Israel Fertility Association, vaccination does not influence fertility at all. Alroy-Preis said the Health Ministry has received only a few dozen reports of such a phenomenon.

Health Ministry figures released on Sunday showed 1,029 new COVID-19 cases diagnosed a day earlier, the lowest such figure since July, although testing tends to be lower over the weekends. The positivity rate dropped below 2 percent for the first time since late July.

There were 448 virus patients in serious condition, of which 336 were unvaccinated, the statistics showed. Since the start of the pandemic last year, 7,912 people have died of COVID-19 in Israel.

You get Israel news… but do you GET it? Here’s your chance to understand not only the big picture that we cover on these pages, but also the critical, juicy details of life in Israel.

In Streetwise Hebrew for the Times of Israel Community, each month we’ll learn several colloquial Hebrew phrases around a common theme. These are bite-size audio Hebrew classes that we think you’ll really enjoy.

Already a member? Sign in to stop seeing this

You’re serious. We appreciate that!

We’re really pleased that you’ve read X Times of Israel articles in the past month.

That’s why we come to work every day – to provide discerning readers like you with must-read coverage of Israel and the Jewish world.

So now we have a request. Unlike other news outlets, we haven’t put up a paywall. But as the journalism we do is costly, we invite readers for whom The Times of Israel has become important to help support our work by joining The Times of Israel Community.

For as little as $6 a month you can help support our quality journalism while enjoying The Times of Israel AD-FREE, as well as accessing exclusive content available only to Times of Israel Community members.

Already a member? Sign in to stop seeing this