‘This is like my road to becoming a chef,’ he says. Well I guess it’s much easier than the other road, the one that involves actually working in a restaurant kitchen and 12-hour shifts on the minimum wage for four years. That’s before you are even allowed to garnish a main course with a sprig of parsley.

Yet, to be fair, the 22-year-old son of David and Victoria Beckham seems to be humbly aware of his limitations. ‘I don’t know if I’ll become a great chef,’ he muses in one episode, ‘but it’s all about the journey.’ 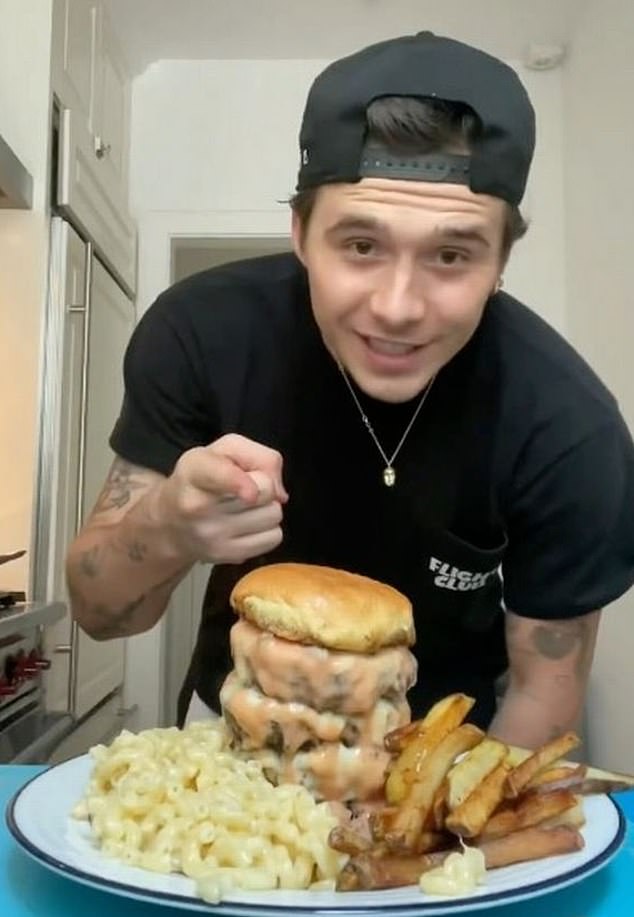 One eight-minute episode shows how to make a ‘Brooklyn Special’ bagel sandwich cost around £75,000 and involved a team of 62 people

As his voyage around the kitchen unfolds, Brooklyn shares each revelatory step on his path to culinary excellence.

‘Vegan sausage, it cooks so much like a normal sausage,’ he notes at one point.

Elsewhere, he shows an impressive depth of knowledge when it comes to dairy produce. ‘I love cheese,’ he says. ‘It’s like butter.’

He also displays a mastery of the philosophy and technique of chopping vegetables. ‘Dicing is like making it smaller.’

Cookin’ With Brooklyn is not a traditional television show, but a series of short films that stream on Instagram to his 13.2 million followers — incidentally more than Jamie Oliver with 8.9million fans, but slightly less than Gordon Ramsay with 13.4 million.

You might think this is a home-cooked conceit, rather like vanity publishing, because these days you don’t need a television company to green-light your pet project when you have so many online fans.

You can just get out there and do it yourself, especially if Mummy and Daddy are millionaires and feeling generous.

However, the copyright on the films is owned by Meta, formerly Facebook, which must think it is on to something.

One eight-minute episode that shows how to make a ‘Brooklyn Special’ bagel sandwich cost around £75,000 and involved a team of 62 people, including six camera operators and someone called a ‘culinary producer’.

Presumably he or she is there to eliminate any gastronomic or technical gaffes and if so — pass me that megaphone, please — WAKE UP AT THE BACK.

‘Brooklyn is the birthplace of bagels,’ states our hero in one sequence, which will be news to the Jewish communities of Poland in the 17th century who had them for breakfast most mornings.

He enthuses about a little-known crunchy delicacy listed in an on-screen caption as Cole Slaw. Who he? Sounds like a trombonist who once formed a jazz trio with fellow Cole Porter and a merry soul called Old King. 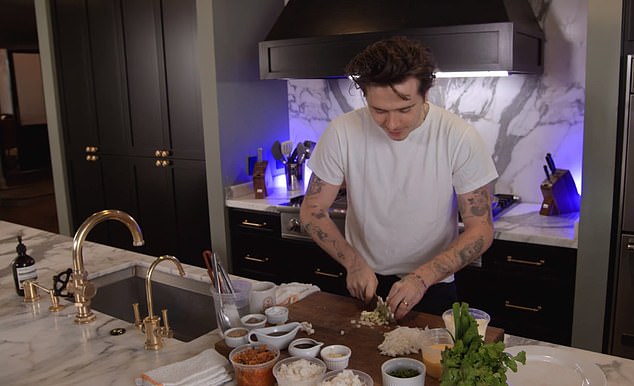 Cookin’ With Brooklyn is not a traditional television show, but a series of short films that stream on Instagram to his 13.2 million followers

In every single cooking segment in the test kitchen — when Brooklyn is, say, crisping rice in bubbling oil or browning butter — the saucepan handles are turned outwards and I want to scream.

Safety rule number one in any kitchen, domestic or professional, is to turn the handles of pots and pans inward so you can’t knock them off the hob and spill something or burn yourself.

We all know this, but neither Brooklyn nor the dozens involved in this production seem to have a clue, which says it all, really.

Still, one of the quiet joys of life is watching an expert deploy their skills and craftsmanship; admiring the artisan in his atelier, the artist at her canvas.

Brooklyn Beckham cooking is not like that. If you sent a blindfolded chimp into space wearing oven gloves and asked it to ice roses on to a wedding cake in zero gravity, that might give you some idea of the level of dexterity we are talking about.

In a segment filmed for the TV’s Good Morning America, Brooklyn tried to pick up a fried egg with a pair of tongs.

Watch him here spreading mayonnaise on a bun, slicing an uncomplaining potato or staring into the depths of a deep-fat fryer like a man confused by the mysteries of the universe. 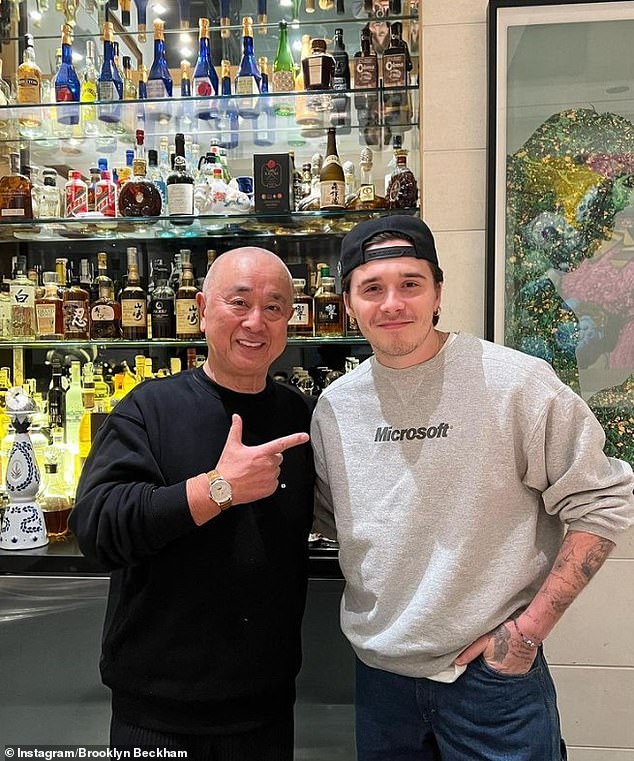 In the Sushi episode, he goes to Nobu to meet celebrity chef and family friend Nobu Matsuhisa (pictured), who is going to teach him how to make sushi

How do you know when it’s done?’ he asks, pointing to a hash brown sizzling away. Patience, young grasshopper. All will be revealed in the next lesson, along with Boiling A Kettle and Ice Cubes The Easy Way.

Embarrassingly for us as a nation, there seems to be some kind of UK gastro theme going on, as Brooklyn explains to the world the inspiration behind his signature dishes such as his Fish & Chips Bagel and his Bangers & Mash with Onion Gravy.

‘English food is food that I grew up on,’ he says.

Of course he grew up with a family chef in situ when he was not eating at the finest restaurants with his parents.

In the Sushi episode, he goes to Nobu to meet celebrity chef and family friend Nobu Matsuhisa, who is going to teach him how to make sushi.

In the real world, it takes 15 years to become a sushi chef, but Brooklyn breezes through it in five minutes, aided by his personal collection of initialled Japanese knives, worth thousands of pounds.

‘Very important, very sharp,’ he says and by now viewers will have gleaned he is not talking about himself.

He meets other experts, such as LA chef Nancy Silverton and someone called Adam Perry Lang, who was Jeffrey Epstein’s chef, which is awkward, so let’s move on. He visits an English pub in Los Angeles, a question burning on his questing foodie lips.

‘How do you make mashed potatoes?’ he asks.

Brooklyn comes across as rather sweet, but as dim as a tomato. ‘Even you can do this recipe,’ Nancy Silverton says, showing him how to make a pecan tart.

Still, you have to wonder who or what Cookin’ With Brooklyn is for, given that there are no recipes, no instructions, no technique and precious little real cooking actually going on — just a bit of frying, boiling and assembly.

It’s a souffle of insubstantiality, pointless except to his most devoted fans. A cynic might conclude it’s just another half-baked attempt by Brooklyn to find some kind of famous-person career for himself; somewhere to bloom on the celebrity trellis in Hollywood.

He tried football when he was a teenager but didn’t score there. Then he was a photographer and in 2017 published a book of his photographs called What I See.

‘Elephants in Kenya. So hard to photograph, but incredible to see,’ he wrote. Well maybe now, he can pan-fry one instead.

In this scramble for celebrity, perhaps he just alighted on making a series called Cookin’ With Brooklyn because of the snappy title.

If he had been called something different, maybe the show and his entire life might have been different, too.

Tennis With Dennis. Golf with Rolf. Fighter Jet Flying With Ryan. Smelting With Elton. Let’s stop it there.

Yes, it must be crippling for young men and women with real talent in the photography and cooking fields to see this no-hoper bumbling around getting lots of attention and exposure, including a recent slot on The Late Show with family friend James Corden.

And every step forward paved by the success of his parents instead of the efforts of himself.

But, as the gem lettuce said to the radicchio, in a joke I don’t expect Brooklyn Beckham or his team to understand, it’s best not to be bitter. So let’s wish him well.

‘It’s a lot harder than you think,’ said Brooklyn to Nobu, when the master was showing him how to make sushi rolls. It is thinking that it was easy in the first place that is the problem here.