Intel laid out its future graphics accelerator roadmap to investors on Thursday, which includes plans to blur the lines between integrated and discrete graphics.

The chip giant said it will ship its discrete desktop Arc GPUs, code-named Alchemist, in the second quarter of this year. The Arc GPUs will appear in laptops before then, in the first quarter. Workstation-grade components are due in the third quarter.

“We have had a very enthusiastic response from partners already capturing over 50 design wins across top OEMs and add-in card vendors,” said Raja Koduri, senior vice president and general manager of the Accelerated Computing Systems and Graphics Group at Intel, in a taped speech for the investor day conference.

The Battlemage GPUs will be integrated as a chiplet die – Intel calls them tiles – alongside other chiplets containing CPU cores and support circuitry, all contained in a single large Meteor Lake processor package. This approach comes as Intel moves to advanced manufacturing nodes in which compute tiles can be stacked vertically and linked up through high-speed interconnects. “Meteor Lake is a brand new architecture that will enable tiled GPUs to be integrated on a 3D package. This is super exciting, as this allows us to offer discrete graphics class performance with the efficiency of integrated graphics,” Koduri said. It’s a new class in graphics that can’t be called integrated or discrete, he opined. “This is just the beginning of the strategic advantages that this tiled architecture will give us. We will talk more about this in the future,” Koduri said.

Intel may have an early edge on tiled GPUs as it will be the designer and manufacturer of its own chips. Nvidia is a fabless company that relies on third-party fabs, and hasn’t talked about developing tiles to slot alongside x86 cores in future PC chips.

Nvidia did not respond to request for comment on whether it planned to develop tiles to supplement its discrete and integrated GPU products.

Intel outlines the years ahead

Intel has already started work on its graphics architecture for beyond 2024, code-named Celestial, with the goal to achieve graphics leadership “in every segment we participate, from low power mobile to high performance workstations,” Koduri said.

Intel will share more details about Endgame this year. But reading the tea leaves, the Arc GPUs could be used as bare metal in PCs or remotely in the cloud to run metaverse applications that include gaming, animation, and visualization. Nvidia offers that via its Omniverse platform, a largely closed metaverse platform that includes Nv’s hardware and software products.

“With the combination of our silicon platforms along with Endgame, we envision that Intel and the PC platform will continue to thrive as we usher in the metaverse,” Koduri explained.

The exec heads a division formed last year and is targeting the wider market of accelerated computing with CPUs not being enough to meet the computing needs of graphics, supercomputing, and artificial intelligence.

The division’s product roadmap includes supercomputing chips such as Ponte Vecchio. Koduri is aiming for $10bn in revenue by 2026 through its initiatives. The total addressable market opportunity will be worth $155bn by 2026, it’s hoped.

“Our focus is on the $100bn opportunity in silicon platforms. Our strategy is to openly collaborate and participate with the ecosystem for the remaining $55bn being in system software and services,” Koduri said.

He went on to take a shot at rival Nvidia, which dominates the supercomputing and AI space, and has an early lead in the metaverse opportunity.

“This is in sharp contrast to the approach taken by our key competitor today. They aim to eat into the ecosystem. While their closed proprietary approach may have some short-term benefits. We don’t believe a closed approach is scalable in the long run for this large an opportunity,” Koduri said.

Nvidia did not respond to requests for comment about Koduri’s quote. 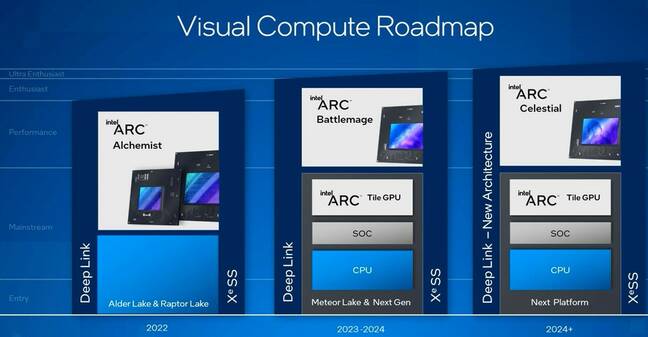 Intel’s visual compute roadmap … How and when to expect next-gen GPUs. Click to enlarge

In a separate speech, Intel’s software group senior vice president Greg Lavender said the company is the top contributor to the Linux kernel, and employed more than 120 maintainers of key open-source technologies. Lavender also reaffirmed Intel’s commitment to open source with things like its OneAPI.

But in recent years, the company has scaled down its Open Source Technology Center, its public face of the open-source movement. The Register has reported extensively about Intel’s secretive software-defined silicon initiative (SDSi) in which Intel staffers have posted hints on the Linux kernel mailing list about new functionality in which users may have to purchase licenses to turn on features physically present in processors not available to use out of the box.

Intel is a wonderful member of the open-source community, and contributes widely to projects with OneAPI, networking components and more, said Michael Larabel, a Linux software engineer, and founder of Phoronix, which tracks contributions to the Linux kernel.

“Intel being secretive about new feature enablement isn’t new, but most often their new feature work tends to not be controversial like SDSi,” Larabel told The Register.

Larabel has mixed feelings about SDSi as Intel hasn’t been forthcoming with early details, which has led speculation and concern.

“It would appear forthcoming processors with SDSi may be arbitrarily restricting some features until obtaining a ‘license’ after the fact. Effectively a software-based CPU upgrade may be appealing for some in the corporate world, but it really depends upon the feature segmentation Intel is going to pursue and what the pricing will look like,” he said.

Intel tries to get out kernel source code for new hardware support and feature enablement early ahead of chip launches and that means not necessarily being very forthcoming with all details. Its goal right now may be to conceal these features to avoid ruining the launch buzz or analysis by competitors, Larabel commented.

“So while initially there may be some areas not effectively communicated with early patches, at least the support works its way out ahead of time to allow time for integration into the Linux kernel and major distributions,” he concluded. ®