Farmers have been left furious after vegan activists hijacked the BBC to smear the dairy industry.

Milkers from across the country condemned the broadcaster over its one-sided portrayal of the trade in last night’s Panorama.

They said the episode, titled A Cow’s Life: The True Cost Of Milk, presented all countrymen as cruel to their animals.

The show aired secretly video filmed by an activist from Animal Equality UK of one farm in Wales.

The shocking footage showed workers kicking, punching and hitting cows in the heads with shovels.

But farmers were livid the Corporation and animal rights group tried to paint the whole trade as cruel. 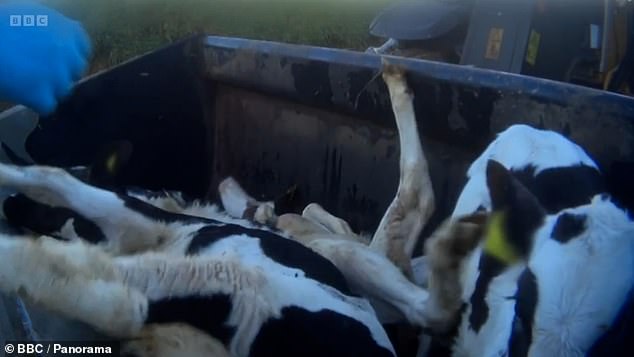 They said the episode, titled A Cow’s Life: The True Cost Of Milk, presented all countrymen as cruel to their animals 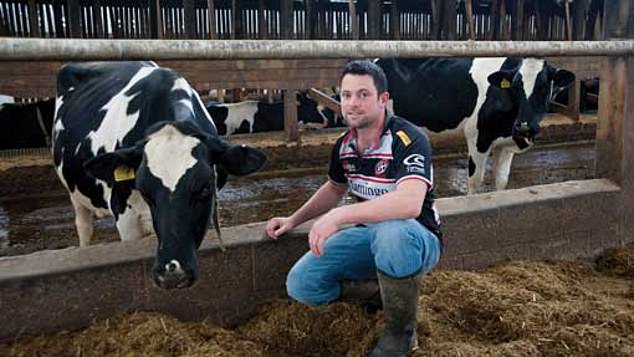 Milkers from across the country condemned the broadcaster over its one-sided portrayal of the trade in last night’s Panorama. Pictured: Dairy farmer Phil Nash from Sussex

What is the Government’s plan for replacing the EU’s £2.4bn-a-year Common Agricultural Policy?

The ‘Sustainable Farming Incentive’ will replace the EU’s common agricultural policy that was worth more than £2.4billion a year.

Under the EU’s Common Agricultural Policy, farmers were given taxpayers’ money from Brussels broadly based on the amount of land they farmed. This meant that the more land they had, the more cash that came their way.

Until 2024, the Government will maintain the £2.4billion paid to the UK in EU agriculture subsidies, but will halve the £1.8billion handed out in direct payments to farmers.

The £800million to £900million-a-year saved will go towards the new ‘landscape recovery’ scheme.

It will pay farmers for protecting the environment instead of largely receiving payments to grow crops and rear livestock.

Farming accounts for more than 10 per cent of UK greenhouse gas emissions, making it critical to climate change.

The Country Land and Business Association (CLA) praised the scheme as potentially ‘the most progressive and environmentally responsible’ of its kind.

But Britain’s three biggest nature charities – the Wildlife Trusts, National Trust and RSPB – said it was a ‘huge disappointment’.

Instead of encouraging farmers to prevent harm to the environment in the form of air and water pollution and soil erosion, the scheme rewards the status quo, the charities claimed.

They added that standards saying legumes, which improve soil health, are required on only 15 per cent of land was ‘a really low ambition’.

Craig Bennett of the Wildlife Trusts said: ‘After leaving the EU, we were promised that the billions of pounds of taxpayers’ money given to farmers would be used to improve our natural world.’.

He added: ‘It’s an absolute scandal that the Government has failed to seize this unique and important opportunity.’

Rob Pooley, who has a 300-strong herd, said: ‘So disappointed by the BBC they have shown the vile actions of those workers on dairy farms shown.

‘But yet they won’t show the 99 per cent other dairy farms in UK producing quality milk with the best animal welfare in the world please everyone don’t think that’s the norm.’

Steve Evans, a farmer from Pembrokeshire in Wales, said: ‘Don’t tar all farmers with the same brush.’

The cheesemaker added: ‘In my experience it’s far from the norm and actually becoming rarer.

‘What is becoming more common is farmers suffering mental health crises and feeling disconnected from society, compassion is the greatest of virtues.’

Dairy farmer Phil Nash from Sussex said: ‘Please don’t think this is every dairy farm Eve, on our farm we respect and care for our cows, this is a tiny minority.’

The Panorama episode aired undercover footage of one dairy herd in Carmarthenshire, Wales.

It showed cows treated poorly, including being beating repeatedly and calves being dumped from digger buckets.

The farm in the spotlight supplied Freshways, which processes the milk before it goes into the supply chain.

The farmer was signed up to the Red Tractor assurance scheme which gives buyers a guarantee their product comes from farms where the animals are looking after.

Professor Andrew Knight, from Winchester University told the programme: ‘It’s abuse, it’s inhumane, this should not be occurring.’

Barrister, Ayesha Smart said of the clip of a cow being hit with a shovel: ‘Quite clearly that would constitute an offence and we would prosecute something like that.

‘It’s basically an assault against the animal and using a weapon is inevitably going to cause some degree of suffering and pain.’

After the show was aired, Animal Equality UK went on a PR blitz to try to whip up anger against struggling dairy farmers.

It also tried to rope in well-known activists – such as Chris Packham – to support their cause.

It shared the footage on its Twitter page multiple times, with one caption reading: ‘This is your sign to #GoVegan!’

It also retweeted numerous people who believed the whole industry was how Panorama painted it and called for people to boycott the milk trade.

Packham promoted the show ahead of its airing last night, which was welcomed by the group. 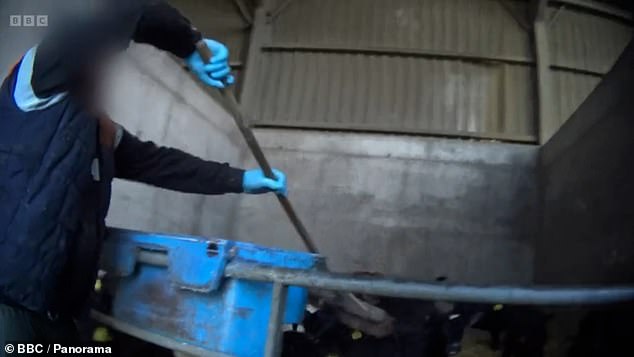 The Panorama episode aired undercover footage of one dairy herd in Carmarthenshire, Wales 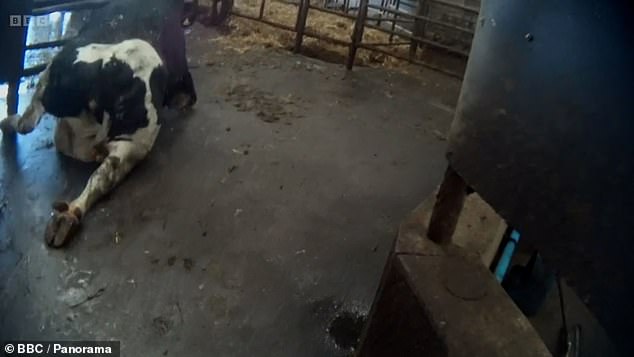 It showed cows treated poorly, including being beating repeatedly and calves being dumped from digger buckets

One in ten Welsh farms could go to the wall because of rewilding, unions warn

Welsh farmers are up in arms over plans by Mark Drakeford administration to plant 80million trees – insisting politicians are ‘fixated’ with rewilding.

Farmers’ Union of Wales (FUW) has said it will make it impossible for farmers to continue to live in their communities – and that 10% of farms could go.

Last year more than 12 farms in mid-Wales were sold to investors outside the country, amid claims the land was just being bought up and planted to offset the carbon of the rich.

Teleri Fielden has just taken over the tenancy of a farm in Snowdonia.

She told the Guardian:  ‘I just find it bizarre. It is as if they just go, ‘we’ll pluck all you people out of there, we don’t want you, your livelihoods, your traditions or your land management skills’, adding: ‘It’s a weird kind of Highland clearance,’ adds Fielden, referring to the forced removal of people from farms in the Scottish Highlands by landlords from the mid-18th century.

‘Nature can do amazing things, but if we separate ourselves from the land, we will lose that link, as well as the skills and experience of managing it for ever. We could just import food – or instead, we could create livelihoods, local communities and homegrown protein’, she said.

There are similar concerns in Scotland.

NFU Scotland vice-president Andrew Connon has said is ‘naïve at best and certainly short-sighted, having the potential to be damaging in other economic, environmental and social aspects’.

He said: ‘I am receiving fresh calls every week from despairing farmers and crofters across Scotland telling me of another farm or estate destined for tree planting’.

Industry experts roundly condemned the practises on the one farm in Wales but pointed out it was far from the norm.

Professor Jude Capper, who works in the sustainable beef and sheep department at Harper Adams University in Shropshire, said: ‘There is no excuse for cruelty on a dairy farm.

‘Cows should be cared for with the respect they deserve. Please don’t assume the appalling actions of a tiny few represent the majority.’

She added: ‘Some parents are abusive, yet that doesn’t mean that all children are abused.’

‘It’s a shame Panorama glossed over the huge challenges farmers have to overcome to make it work and the higher returns you need.

‘But let’s at least talk about what we are trying to do to while research keeps working on solving it.’

The Royal Association of British Dairy Farmers said it was disappointed with the sensationalist picture painted by Panorama.

RABDF Managing Director Matt Knight said: ‘UK dairy farmers operate to some of the highest welfare standards in the world due to the robust and comprehensive legal frameworks protecting animal welfare alongside the credible quality assurance schemes and initiatives that exist.

‘Cow welfare is at the heart of everything they do. Happy cows are productive cows, which is why it is so important.

‘Lameness was an issue highlighted on the programme with one vet suggesting up to 30 per cent of cows expected to be lame in the UK.

‘Our farmers work long hours, often going weeks without a break to ensure the health and welfare of their cows are maintained.

‘So, we are sad the BBC has chosen to highlight one farm where inexcusable abuse was witnessed, as this is not representative of our industry.’

Mr Knight added: ‘Our farms continue to improve the highest levels of welfare in the world and are vital in producing one of the most versatile products which form an essential part of a healthy and balanced diet.’

A spokesman for NFU Cymru said: ‘In Wales, and across the UK, we have a range of farming systems and every system is required to uphold high standards of animal welfare and husbandry.

‘We do not consider that the allegations made and footage contained within the Panorama – A Cow’s Life: The True Cost of Milk documentary accurately reflect the high standards of animal welfare implemented by farmers across the country. Animal health and welfare is a top priority for British farmers.’

Lawyers for the Welsh farm told Panorama if workers had abused cows a disciplinary process would be started.

They added that the farm owner continues to invest in the health and welfare of his herd.

Red Tractor and Freshways said their farms have to meet high welfare standards. Freshways is understood to have suspended the farm in Wales pending a probe.

The UK’s sales of dairy products continue to rise, with an extra 302 million litres of milk bought in 2021 compared to 2019.