The ExoMars Trace Gas Orbiter – a joint project by the European Space Agency (ESA) and Russia’s Roscosmos – has captured an image of Mars’ southern highlands, with an intricate pattern made of windswept knobs, conical mounds, and ridges.

The ESA posted the picture on Twitter on Friday, though it was actually taken on February 1, 2021.

According to the agency’s website, the image offers a rare glimpse of Mars’ landscape near Hooke Crater in the southern highlands.

The cream-colored Martian expanse is riddled with depressions alternating with mounds, as well as countless wrinkles – a type of landscape defined by scientists as similar to the “chaotic terrain” seen elsewhere on Mars.

However, perhaps the most eye-catching feature in the picture is the manifold blue tendrils spreading out across the entire landscape and converging to form lumps in certain areas. The ESA description says the bizarre pattern was formed by dust devils. Over the years, these whirlwinds of dust have left marks on the planet’s surface, with an apparent north-south orientation “indicating a possible local wind pattern,” the ESA claims. 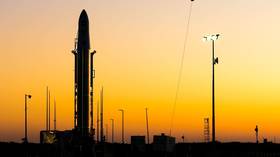 However, if you were to look at the blue wisps from aboard a spacecraft, they would not be blue at all. The color is the “result of the three filters that were combined to create this image,” according to the scientists. The purpose of the filters is to “produce a color infrared image with greater sensitivity to variations in surface mineralogy.”

The ExoMars Trace Gas Orbiter commenced its mission in 2018. Apart from sending back pictures like this one, the orbiter is also said to be “providing the best ever inventory of the planet’s atmospheric gases,” as well as “mapping the planet’s surface for water-rich locations.”

The international team of scientists behind the project is also planning to send a rover to probe Mars’ surface in August-October this year. The launch was initially supposed to take place in 2020, but was postponed due to parachute testing issues.