The discovery of a new species of ancient crocodile is enough to make any palaeontologist’s year, but one team in Australia was in for even more of a treat after discovering the remains of a dinosaur as well.

The partly-digested remains of a young ornithopod dinosaur were discovered in the stomach of the new species of crocodile called Confractosuchus sauroktonos, which roamed Australia 95 million years ago.

The fossilised bones were recovered from a sheep station near the north western margins of the Winton Formation, a geological deposit in Queensland.

The crocodile, measuring 8.5 feet long during its lifetime, may have snatched the unsuspecting ornithopod as it was ‘an easy meal’, experts say. 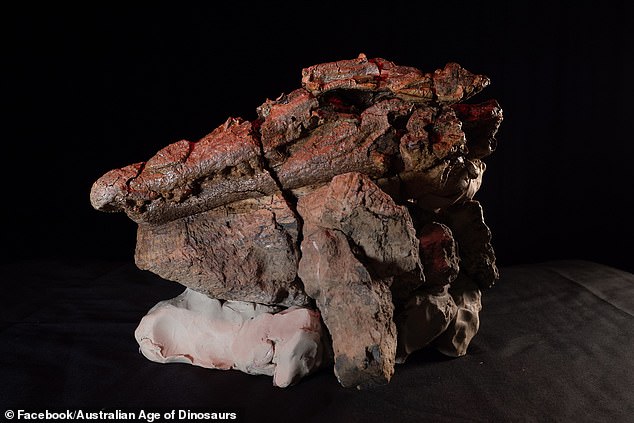 The skeleton of Confractosuchus includes a near-complete skull with dentition and semi-articulated postcranial skeleton, though its tail and hindlimbs are missing 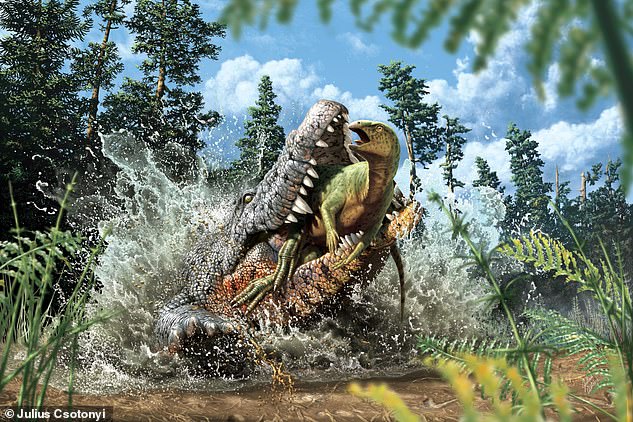 Artist’s impression depicts the capture of the ornithopod by the crocodile species, Confractosuchus sauroktonos 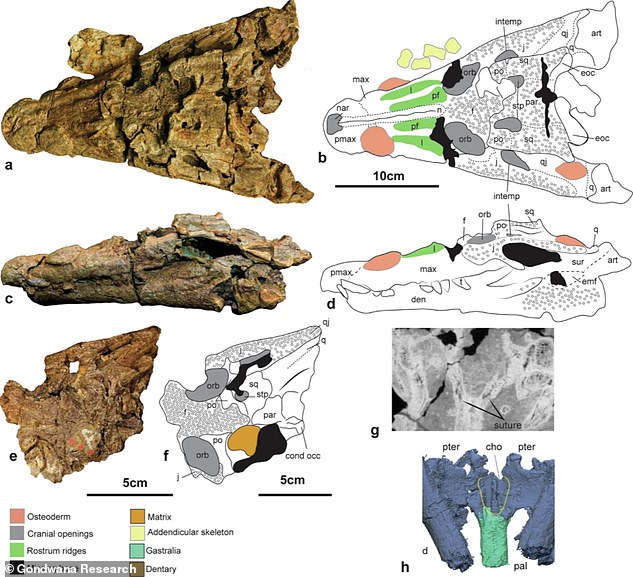 The combined remains represent the first evidence of crocodile-dinosaur predation in Australia, according to the experts.

Such a discovery in the gut contents of a Cretaceous-aged crocodile is extremely rare, as only a handful of examples of dinosaur predation are known globally.

Contrary to popular belief, crocodiles and dinosaurs existed at the same time; in fact, modern crocodiles and alligators are almost unchanged from their ancient ancestors that lived during the Cretaceous period, between 145.5 and 65.5 million years ago.

C. sauroktonos is not only a new species, but a new genus. Its bones were found back in 2010, but only now has an analysis of the remains been published.

The research was led by Australian Age of Dinosaurs Museum Research Associate Dr Matt White through the University of New England in collaboration with the Australian Nuclear Science and Technology Organisation (ANSTO).

‘At the time of its death this freshwater crocodile was around 2.5 metres [8.2 feet] long and still growing,’ Dr White said.

‘While Confractosuchus would not have specialised in eating dinosaurs, it would not have overlooked an easy meal, such as the young ornithopod remains found in its stomach.’ 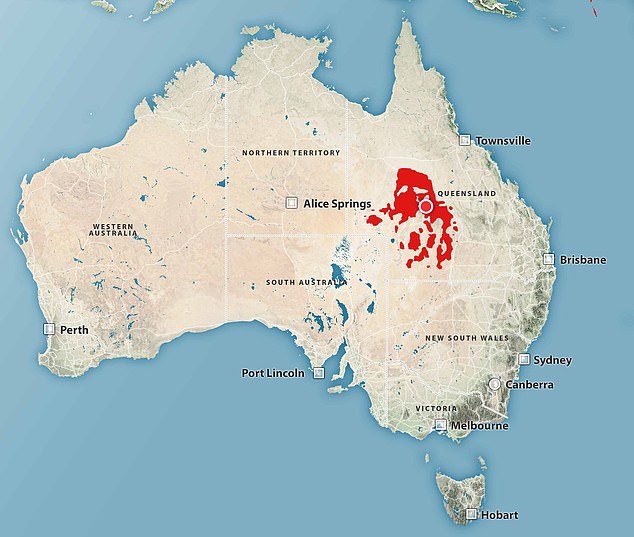 The Winton Formation (red shaded area) is a thick sequence of sedimentary rocks in the Great Artesian Basin and a graveyard of dinosaur remains. The town of Winton is marked by a red circle 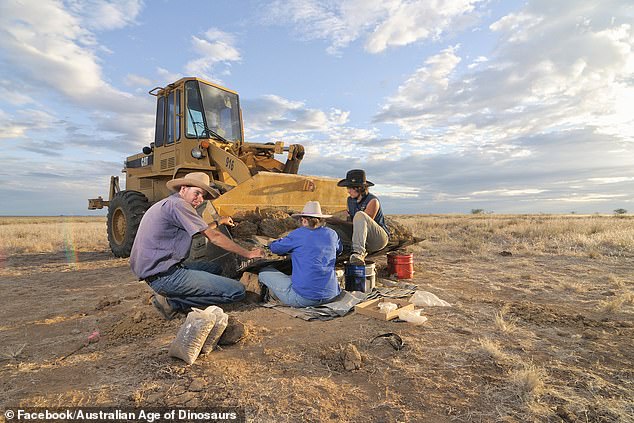 Discovered in 2010, C. sauroktonos was partially crushed by a front-end loader during the removal of overburden from a sauropod dinosaur excavation site. Numerous small bones exposed within the fractured concretion revealed the partial skeleton of a small Cretaceous animal 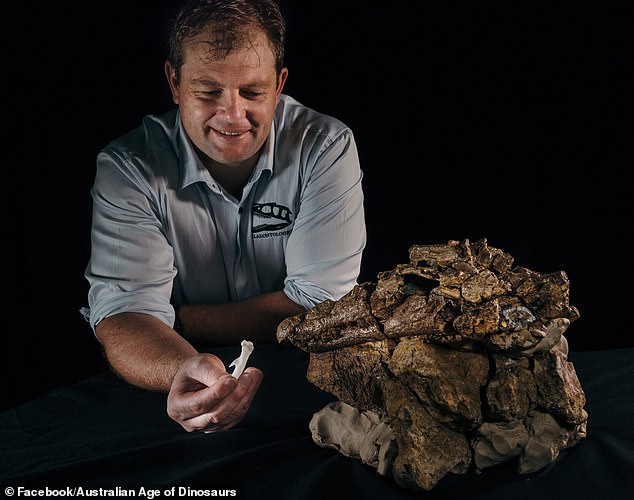 At the time of its death, the croc was around 8.2 feet long and still growing, according to Dr White (pictured here with the specimen)

The Winton Formation is a thick sequence of sedimentary rocks in the Great Artesian Basin and a graveyard of dinosaur remains.

Each year, the Australian Age of Dinosaurs, a non-profit organisation and museum local to Winton, holds dinosaur digs near the town.

In 2017, the team discovered the site of the new find by chance while waiting for another site to dry out after rare rain.

‘The site was just littered with broken up pieces of bone which didn’t really resemble any complete bones so we marked the site and returned in 2018 to collect the surface material and excavate the site,’ said dig coordinator Bob Elliott.

‘Although there was no additional remains below the surface I was amazed that what we found was only the second fragmentary theropod discovered in the area,’ said Dr White.

Winton is also home to the world’s only recorded evidence of a dinosaur stampede.

Ornithopods – small, plant-eating, bipedal dinosaurs – have been described as ‘bird-hipped’, because of their pelvic structure being a little bit similar to birds.

The ornithopod found inside C. sauroktonos marks the first skeletal remains of an ornithopod reported from the Winton Formation.

At the time of its death the ornithopod was only a juvenile, weighing up to 3.7 pounds (3.7kg).

The small ornithopod bones show evidence of fossil articulation, meaning the bones are arranged in order, as they were in life.

So, C. sauroktonos either directly killed the animal with a fatal bite or scavenged it quickly after its death.

While being eaten, one of the ornithopod’s femurs was sheared in half and the other femur was bitten so hard that a tooth mark was left on the surface of the bone.

According to Dr White, this find suggests dinosaurs were intrinsically part of the Cretaceous ecology as scavengers, predators and prey.

‘Given the lack of comparable global specimens, this prehistoric crocodile and its last meal will continue to provide clues to the relationships and behaviours of animals that inhabited Australia millions of years ago.’

The specimen was discovered on Elderslie Station, near Winton, and excavated by staff and volunteers from the Australian Age of Dinosaurs Museum in 2010.

It includes a near-complete skull with dentition and semi-articulated postcranial skeleton, though its tail and hindlimbs are missing. 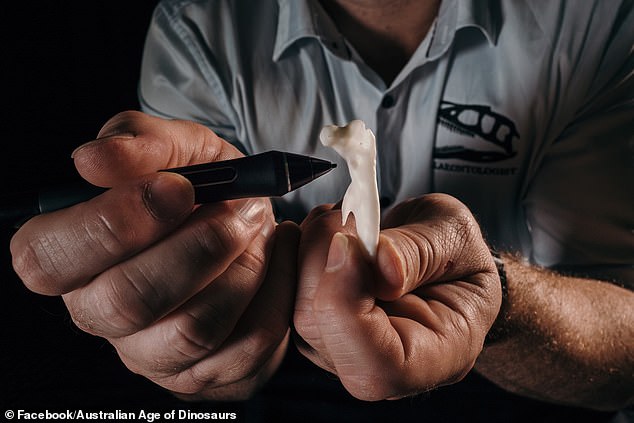 While being eaten one of the ornithopod’s femurs was sheared in half and the other femur was bitten so hard that a tooth mark was left on the surface of the bone. Dr Matt White is seen here pointing out the bite mark on the 3D-printed ornithopod femur 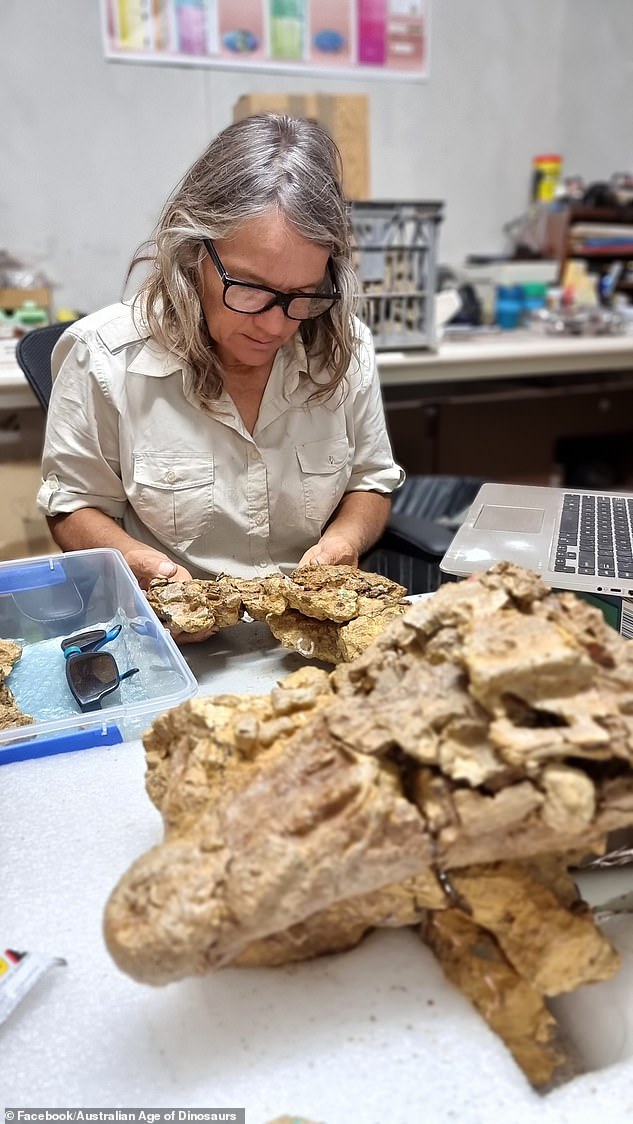 The crocodile specimen was discovered on Elderslie Station, near Winton, and excavated by staff and volunteers from the Australian Age of Dinosaurs Museum in 2010. Preserved in a soft siltstone concretion, the fossil was partially crushed by a front-end loader during the removal of overburden from a sauropod dinosaur excavation site. Judy Elliott (pictured) spent two years puzzling the find back together

Preserved in a soft siltstone mass called a ‘concretion’, the fossil was partially crushed by a front-end loader during the removal of rock and soil.

The small densely packed and fragmented bones in the concretion were too fragile for rock to be removed from them by conventional mechanical preparation methods.

So, in order to identify the animal, the fragmented concretion was placed in the care of Dr Joseph Bevitt, senior instrument scientist at ANSTO.

Dr Bevitt used neutron and synchrotron X-ray micro-CT scanning technologies to identify where bones were located within the concretion. 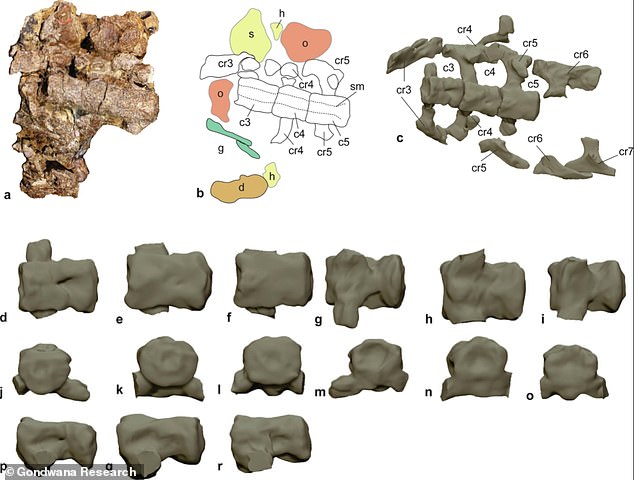 The scan data files were then used by Dr White to digitally prepare the specimen, a process that involved ten months of computer processing, so that a 3D reconstruction of the bones could be made.

According to Dr White, the number of bones present in the concretion was ‘staggering’ – overall, 35 per cent of the crocodile was preserved.

The fossilised remains of C. sauroktonos are now on display at the Australian Age of Dinosaurs Museum, which is located 15 miles from Winton township in western Queensland.

The new study has been published in Gondwana Research.

A TIMELINE OF CROCODILE EVOLUTION

Three feet long. 5-10lbs. Lived in the swamps of eastern Asia. Ate small animals. Ridge of fan-like ‘sails’ on their back. Split off into pre-historic crocodiles and early dinosaurs.

Alive during the early Jurassic period. Most related to crocodilians. Herbivores. Looked much like modern day crocodiles – except their nostrils were located on the top of their head rather than the tops of their snout.

Bipedal. Didn’t resemble modern crocodiles in behaviour or body shape except the shape of their head.

Middle Cretaceous period. 40ft long. 10-15 tons. Ate dinosaurs and fish. Lived in the rivers of Africa. Odd protrusion on it’s snout. Looked and behaved like it’s modern decedents, but it was twice as long and about 10 times as heavy.

Greek for terrible crocodile. Lived in the rivers of North America. About 33 ft long and 10 tons. They had a 6ft. long skull. Fed on fish, shell fish, and land creatures. Evidence in fossils suggests that they attacked large North American tyrannosaurs.

Five ft long, 25-50 pounds, ate fish, and lived in the rivers of North America and western Europe. Long narrow profile and a tooth studded snout. Survived the Cretaceous-Paleogene extinction event that killed off three-quarters of the plant and animal species on Earth – including the dinosaurs.

Non-avian dinosaurs were wiped out and more than half the world’s species were obliterated. This mass extinction paved the way for the rise of mammals and the appearance of humans.

The modern day crocodile – including the saltwater, Nile, and American variants – spread throughout the world. Though it looks prehistoric, it is a highly evolved and complex organism that is a successful predator.

This is a very close relative of the modern day crocodile. Large skull and small raised rim in front of the eyes. Likely prayed on early humans. Lived in the Turkana basin in Kenya. Could be the largest known true crocodile.